When you give retailers digital tools, you unleash enormous potential and transform an entire country. That's what inspired the founder of F-LANE finalist moWoza to become an entrepreneur.

Meet Suzana Moreira, Founder of moWoza, a company that develops mobile and business solutions for emerging markets. moWoza is based in Maputo in Mozambique and supports women-owned small and micro retailers in Southern Africa with mobile services focused around inventory management and record keeping.

Suzana, who is originally from South Africa, moved to Mozambique to build her mobile commerce solution with different offerings that help female entrepreneurs build their business and strengthen them by integrating them into “digital retail communities”. She strategically chose to build her business in Mozambique as she saw great opportunity to support these women with basic business acumen and to raise their awareness of how to use digital solutions for their own convenience. The mobile phone as a tool should help female entrepreneurs to make their working lives easier and help them grow their business with the help of modern technology.

If you had to describe yourself in three words, what would these be?

Suzana: People say that I am very determined. And yes, I am quite persistent. I will stick to something I do, and I will see it through. I am not scared of failing. We all fail and that is ok as it is part of the learning lesson in life. Lots of people also say that I am a risk-taker. And that is an interesting one. I would rather say I take calculated risks. The moment I take a decision I have already thought it through and probably over-analysed it but for an outsider looking in it might seem very bold. Adventurous even. But believe me, I have analysed the risk well. So for me, it is no longer a risk. It is interesting to see the contrast of how people perceive what I am doing and how it feels for me.

How did you come up with the idea for your company? And when was the moment you knew “This is it! This is what it’s going to be!“?

Suzana: I have always wanted to have my own business. We’ve got to start from there. I was influenced by my aunt who was a very successful business woman. From a very young age, I, therefore knew it’s possible. You can go after your dreams and do what you want. I knew I wanted to be a business woman, but the question was rather what business it was going to be?

While working in the fashion industry I started a small clothing enterprise. But as I was still very young, but a fashion manufacturing outfit required a lot of effort and time, I just wasn’t ready yet to invest all time I had in that business. I knew that to run a business successfully, you need to put your heart and soul into it – there is not going to be any downtime. At that time, I “parked” that business and I carried on working, I studied, and I lived my life.

Then a few years ago that bug came back, and I realized that working in corporate wasn’t as fulfilling as it could be if I had my own business. I finally was ready for the challenge. But then the other questions also returned: What was the business going to be? Social Entrepreneurship was a buzzword back then, around 2008, and it caught me and gave me some more clarity: I wanted to develop something that would impact people, to do something that was good for the community, for our planet – most of all for humanity.

Around the same time, I came across an issue that really touched me: It was about Moroccan Women travelling from the Spanish enclave of Ceuta to Morocco, carrying bags of goods on their backs to sell them. I thought, there must be a way to support these women.  I researched this topic and came across the issues faced by small and micro enterprises across the continent. At the same time that mobile phones were on the rise and I felt that the solution must be around building a business (in this case my own) that would provide a service to micro and small business women in Africa so that they can become better and more successful entrepreneurs.

When exactly did you start?

Suzana: The idea came about in 2009. I did a lot of research around my idea and we only really started being active in 2014. In 2014 I also established an office in Mozambique to set up the business.

What were the first three steps in building your company?

Suzana: That is very clear. I moved to a country I had no network in. Firstly, it was building that network. I also decided that I was going to do something in an area that I had very little experience in and it was a steep learning curve: I had to learn a lot about mobile phones and technologies, how the industry worked in Mozambique and thirdly, it was putting a team in place that would support me to get this up and running.

Taking one step back – why did you chose to set your business up in Mozambique?

Was there a highlight moment at the beginning that you clearly remember?

Suzana: I was looking for a contact at the Ministry for Trade and Commerce in Mozambique and I walked in and spoke to a person working there. During our conversation I found out that the Ministry did not have a database, they did not know of how products were flowing through the country. They didn’t know whether they for example had a surplus of a certain product in a certain region of the country. A database with such information didn’t exist.  I realized that this was a unique opportunity, there was really something that could be done in Mozambique.

Was there a big challenge that you had to overcome? And how did you overcome it?

Suzana: Yes. And we are still working on this. E-Commerce or digitalization in Mozambique is only starting to happen now. I’ve had to come to terms with the fact that we were too early in Mozambique.

We’ve had to redesign our action plans as the majority of business women are digitally illiterate. We’ve had to come up with solutions for them to become digitally literate in the first step: We went into the market offering capacity building and business strengthening support services, we’ve had to come up with really simple text solutions so that they can utilize our services. It is an interesting journey since we are supporting micro and small businesses grow their businesses while we are also building our own business. We are basically doing the same thing – just at a different level.

How did you come up with the name moWoza? And what does it mean?

Suzana: The name means mo for mobile and Woza is a Zulu word for running and it is quite symbolic for me. The mobile phone should be doing the work for you, so these traders don’t have to go out and leave their businesses. It is about convenience and the phone can be the tool that offers them services and a lot more convenience.

Your target group are mostly women, female entrepreneurs, and you stepped ahead with a digital offering and at the same time you also train them how to use this offering.

Suzana: And more actually. We train them in digitalization, but we also offer business and financial literacy lessons. We raise their awareness around the various elements of entrepreneurship as the majority of these women have very little schooling. They’ve decided to set up their businesses as a means of survival.

Are you only active in Mozambique or already working in different countries?

Suzana: Currently, we are only in Mozambique. But we are starting to look at different regions. We’ve had an organization contact us to find out if we were interested in partnering to deliver these sorts of business literacy sessions in Jordan, and in Egypt which is a little further away than from where we are. We are thinking about going into our neighbouring countries as Malawi or Tanzania. I have also had a lot of interest from South Africa. Generally, I would say that in most peri-urban and rural areas these are the key problems that these small business women are facing. They have set up their business, but they don’t have any structure.

How does your life today as an entrepreneur look different than from your corporate life? What has changed the most?

Suzana: The biggest change between working for a corporate and running your own business – especially at this stage – is that you get on with it. You really are stretched. You are stretched from a mental perspective – where one hour you’ll be looking at finances and speaking to your accountant, the next hour you’ll be looking at marketing and you’ll be designing a marketing strategy. Later in the day you might be sitting in a technology meeting trying to work through some technological issues. You’ve got to have that bandwidth. And that is probably the biggest difference in the working environment.

The difference in terms of lifestyle is that in corporate you have “downtime”, no matter how busy your role is. Being a founder of your own Start-up, it is far more difficult to have that downtime. I also feel very responsible towards my staff and ensuring that they are employed.

Do you have a motto you live or work by?

Suzana: I do. Ethics are very important to me. Being able to say that everything that we are doing is ethically correct. We are transparent. I do not agree in corruption. I would not do anything that is perceived or could be interpreted as corrupt. And that is very important to me as we are in a business and operating in an environment, where businesses, unfortunately, are run very informally.

If you could give a tip to aspiring entrepreneurs, what would it be?

Suzana: Stick with it! We all hear of overnight successes but once we start to drill into a business we realize that this overnight success could have taken seven years. Normally, there is a lot of homework to be done in the background before the business even sees the light of day and becomes known. From that business becoming known to becoming a success there is also a lot of work that has been done.

And a business is a lot of moving elements. And we must be conscious about it. For any business to success so much effort was put in. As I am living the journey I am realizing that more and more every day.

The interview was conducted by Christina Richter from FIELFALT, the community and blogazine for female empowerment. FIELFALT wants to encourage women to leave their comfort zones to dare something and to achieve their goals and realize their dreams. 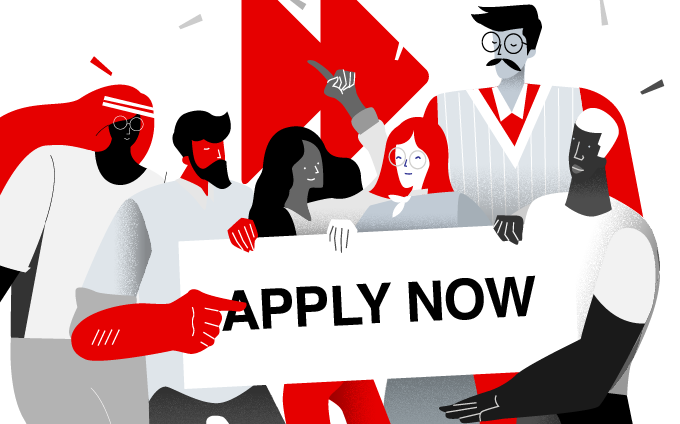 F-LANE goes virtual: Launching the next round

The Vodafone Institute launches the next round of its global social impact accelerator programme for female empowerment virtually. Applications are now open until July 31. 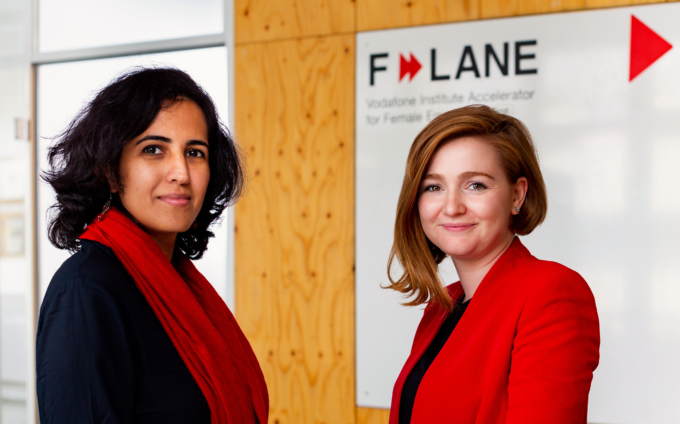 India has one of the highest maternal mortality rates in the world - Together for Her wants to change this with a new databased platform. 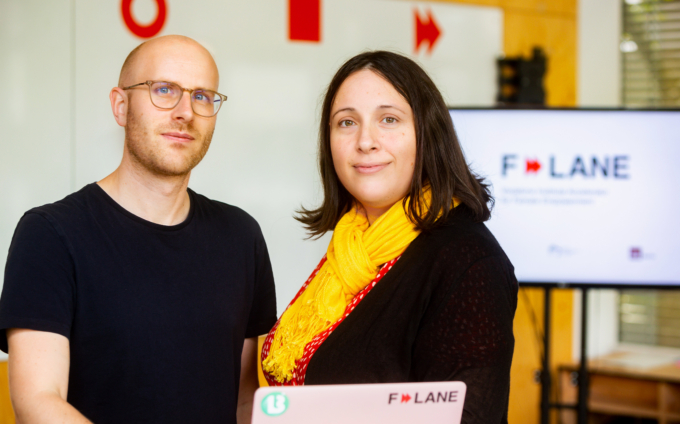 In her endeavor to create a better life for Hashimoto’s patients, Vedrana created BOOST Thyroid, a solution that continuously gives patients insights about Hashimoto and their thyroid health.