“Work saves us from boredom, vice and need”

Work is a huge part of our identity, MIT’s Andrew McAfee says. We therefore have to, sooner rather than later, discuss what defines us in a world with significantly less to do.

Last year there was a real breakthrough in robotics in Boston, where you work and do your research. How would you describe what our workforce is going to look like in the next decade or two?
Andrew McAffee: Instead of any sharp discontinuity that would arise from robotics or AI, we will see a continuation and maybe even an acceleration of certain trends that are already quite clear. The hollowing out of the middle class is a real phenomenon, and there is plenty of evidence that middle-skill, middle- wage jobs are becoming less common. Certainly, there is reason to worry, especially for countries like the US or Germany, that developed a prosperous middle-class workforce in the second half of the 20th century. Our current election cycle in the US reflects this trend as well.

Would you associate the rise of populism on both sides of the Atlantic with this decay of the middle class? Some say it is the backlash of globalisation and digitalisation, do you agree with that?
To some extent, but it is obviously more complex than that. In case of America, there’s a part of society which feels left behind and “cheated by the system”, and that contributes to the rise of populism and demagogues. These people do not feel like the current changes in the economy and society work for them like they used to before. Hence, this “return to greatness” is so appealing to a large number of people.

I’d say this shift is mostly associated with the banks and Wall Street – nobody ever blames this on robots.
It is always easier to blame foreigners for taking our jobs than blaming technology. There’s a backlash against globalisation, but the backlash against technology is not as mature and developed yet. In Western countries, job creation happens at the high end for skilled and educated people. In America there are more and more jobs created at the low end of the job market – jobs with low pay and fewer benefits. The American social safety net is poorly developed and this leaves a lot of families struggling financially. The evidence is clear that job creation has moved from the middle class towards the bottom. The middle jobs were concerned with routine knowledge work or routine physical work and by now we have developed automation for both of these fields. Those jobs are not coming back, because software is cheaper and more reliable than the human workforce.

Are we compensating for those trends by creating new industries?
Yes, but it does not appear to be generating a lot of opportunities for the middle class. It is beyond doubt that there are new jobs being created that did not exist before – think about data scientists or social media consultants. But again, the problem is that these jobs are usually at the high end of the spectrum. On the other end of that spectrum, take the example of an Uber driver – he or she is doing a job that did not exist a decade ago. These days retaining a job in which you can set your own schedule and can make a living whilst not having to have a college degree is a big deal. And though Uber is not at fault for failing to create industrial middle-class jobs, let’s not pretend we are seeing the same jobs and wages that we had before.

The real competition is with technology, and not with other drivers. One day, we will have self-driving cars…
Yes, and Uber is investing heavily in selfdriving cars. We are still generating new jobs for people, but I think that in this entrepreneurial society the focus of companies is not on creating new jobs. If people can build businesses in a scalable way, they will do so. When Instagram was bought for one billion dollars by Facebook, Instagram had fewer than 20 employees. We are building extremely impressive companies that generate huge value, but they do that with a lot fewer people than the giants of the industrial era did.

One observation I have made is, if we look at one specific field, that of media and AI, we can see that there is still some enthusiasm in the US to invest in that industry.
Absolutely. Media companies seem to be experimenting and exploring new ways how their content can be channelled to people – take BuzzFeed, Vice or Bleacher Report. Then again, we can see very wealthy tech entrepreneurs buying newspapers; take the example of Jeff Bezos and the Washington Post.

Netflix and Amazon, working with data aggregation, give me recommendations on the basis of my preferences and the preferences of other users. The same is true for Spotify and Soundcloud when it comes to music. Will, finally, journalism be the next industry to be revolutionised?
People have a great thirst for content. Entrepreneurs are trying to find new ways to deliver content in a way that customers find compelling, whilst still generating a profit. The heart of the industry is still content, and content automation will not happen any time soon. Even though we have algorithms to generate stories and news, I don’t think finding the next big story will become an automated process.

How do we deal with big data in journalism?
It is a model. I doubt that everybody wants to consume data-heavy news. Take the current elections for example – whilst much of it is heavily data-driven, you still have pundits that talk on TV and write columns about their personal impressions. And whilst pundits have a historical track record of wrongly predicting the outcome of elections, there is still a heavy demand for their content. In fact, jobs that are most demanded in the economy are the qualitative ones. Entrepreneurial and management skills provide the new foundation for a successful career – and those are not the skills that are always associated with an IQ of 140 or higher. Again, I don’t think we’re heading into an employment apocalypse, where tomorrow we wake up and robots have stolen our jobs. I think that the trends are clear, and based on the progress of technology that we are experiencing this will only accelerate.

While a machine does your work, you can sit around. Will this trend lead to a change in our attitude towards the importance of work? Or is this rather the end of a world as we knew it?
It is a big deal. Like Voltaire said: “Work saves us from three great evils: boredom, vice and need.” Out of those three, need is the easiest to compensate for. What should concern us beyond that is figuring out what a healthy, balanced life looks like when it is not dominated by a concept of work from the industrial age. The answers we have come up with so far are scaring me. Charles Murray observed that the top 20 per cent of America’s white middle class has not changed in the past 50 years, with equal rates of marriage, family size etc. If you look at the bottom 20 per cent, however, 50 years ago their lives were very close to the upper 20 per cent. Since then, all these indicators have drifted off steadily to thepoint that divorce rates have risen, the number of one-parent, one-child households have risen. So have jail rates, drug use, mortality rates, you name it. In fact, this is the only demographic in which the mortality rate has risen, and the three causes for the rise have been cirrhosis, suicide, and alcohol / drug poisoning.

But then just how important is a job these days, regardless of the profession?
Hugely important. You need to work – it’s a social status. It gives you an identity, it gives you dignity, it brings you in contact with other people. I look at this through both sociological and economical lenses, and what I see is that I personally have become a huge fan of work. Not because of inherent moral values, but rather because it provides a basis for a healthy life. And my fear of the disappearing middle class does not mean that I fear people starving – in fact we live in a very abundant society. But I see more bad than good things coming up in the future, be that marginalization or discrimination.

Is there a need to tackle the things that are ahead of us? Not only in singularity, but do we need to rethink our philosophy towards work?
As I see it, we are moving towards this great detachment of having a very productive economy that does not need very much labor. In 50 years, the mines, the factories, the warehouses will be automated. Trucks will drive themselves, crops will pick themselves. We will have an extraordinarily automated economy that generates goods and services for us, and we will not need labour and this idea of “full employment” any more. I am aware that arguments just like that have been made for the past 200 years, and I am aware that until a few years ago they were unproven. But when I look at the technological progress we are making, we do need to confront your question – what does a good society look like in 50 years?

And we need to keep in mind that it’s not just the lower-end jobs that are getting scarce…Absolutely. When jobs get replaced, workers do not move up the ladder. They have to go down, which puts pressure on the lower-end workers. This causes wages, as well as unemployment rates, to increase. I’m an advocate of the negative income tax, and this is one of the key reasons why. In America, we only do this to a very small extent, and I would like to see more of that. However, this only takes care of Voltaire’s “need” part – we still need to tackle vice and boredom.

Your model led Germany through the last crisis – the idea that people would get money back when selling their cars earlier saved the entire domestic car industry.
Every time you tax or regulate something, you are interfering with the market. I support proper regulation, so there is a need for the presence of government intervention in markets. However – that’s different than turning our backs on markets and having a Soviet-style “everybody gets an apartment” policy.

America is the leading force in the digital and AI age so far. Do we see an American tech renaissance happening?
Yes. People are busy everywhere and especially in Silicon Valley, where the future of our technology is being developed – people work tremendously hard. Though pay may not reflect the effort put in, people really do believe in their work.

This interview was previously published in Factory Magazine, a start-up magazine by the Factory Berlin.
Interview by Alexander Görlach.

“We will not run out of jobs but maybe out of skills!”

In the fifth event of the dialogue series "AI&I" Vinton G. Cerf talks with Professor Alexander Görlach about the effects of artificial intelligence on the job market and about visions of the Internet of the future.

Vinton G. Cerf on Artificial Intelligence and the future of the internet

In the fifth event of the dialogue series "AI&I" Vinton G. Cerf talks with Alexander Görlach about the effects of artificial intelligence on the job market and about visions of the Internet of the future. 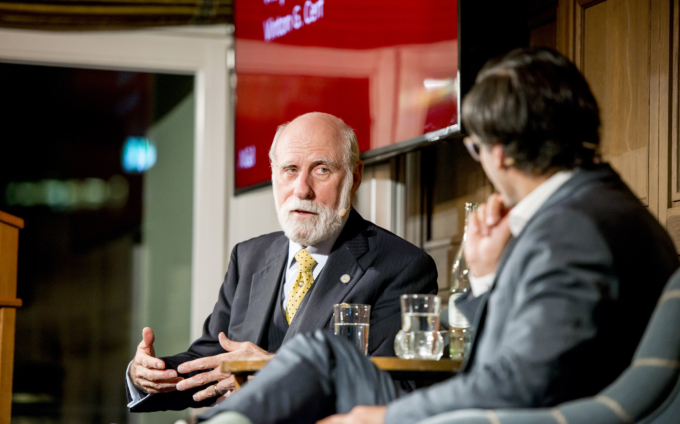 Vinton G. Cerf talked to Prof. Dr. Dr. Alexander Görlach about i.e. the responsibilities of corporations using AI and designing software, about the effects on jobs and education and about his vision of the future of the internet.