Networks have been around for centuries and have proven to be vital when it comes to disseminating ideas, says historian Niall Ferguson. Internet-based social networks, though, are dangerous, he argues, because they prioritise outrage and extreme views.

The art of building networks

Your book, The Square and the Tower, traces the influence of non-hierarchical networks throughout history. Have such networks taken on a new life in the 21st century?

NIALL FERGUSON: My motivation for writing The Square and the Tower came partly from the ascendancy of Silicon Valley and, more specifically, the rise of the social network platforms Amazon, Google and Facebook. But I had been groping towards a book about networks for a while for different reasons. Right now, I am in the middle of writing a biography of Henry Kissinger; I’ve written the first of two volumes. The second volume, a work in progress, is partly the story of how he went from being a professor to being one of the most powerful men in the world.

The book argues that, while it’s true that he’s brilliant – and that’s often, though not always, an advantage in the realm of power – it’s probably just as important that he’s a consummate networker who is extremely good at connecting, from the government to the media and Hollywood, from the United States to Europe and China. I wanted to explain his ascendency after 1969 by showing that he instinctively builds networks.

What can his biography tell us about the way we network today?

Kissinger’s transition was part of the American metamorphosis, and indeed global shift, away from the hierarchical structures of the mid-20th century to something much looser. Hence, I was already thinking along those lines when I moved from Harvard to Stanford three years ago. Here we are, on the very periphery of Silicon Valley, where they think they’ve invented the world anew, and my overwhelming instinct is to say that they didn’t invent social networks. They already existed. They are how human beings organise themselves informally. What Silicon Valley did was to build bigger and faster networks than ever before, but it didn’t create social networks.

Historically, the best way of transmitting values or achieving a change in values is through a network. The success of both Christianity and Islam illustrates this point very well. You can’t really explain the extraordinary success of these two monotheistic faiths without realising that they were transmitted extremely rapidly, despite almost no technology, to vast numbers of people. And not only did it happen quite quickly, but the networks then proved remarkably resilient to persecution and conflict. From that experience, we know that networks are how ideas are transmitted, and history has shown that you can transmit any kind of idea, wicked or virtuous, by that means. There’s a strange process that determines which ideas go viral, and it’s not self-evident that the good ideas always win.

How exactly does technology impact the marketplace of ideas?

As you add technology, you change the ways human beings interact. First, we had the written word, then we moved to the printed word, and so forth, to the telegraph up to the present. You continuously make it easier and more comfortable for people to communicate, lowering the cost to zero and overcoming the distance problem. As a consequence, the potential exists for the extraordinarily rapid dissemination of ideas. The problem is that if you construct your networks on the basis of revenue from advertising, if that’s how you actually monetise Facebook or Google searches, then you start to build perverse incentives via algorithms.

The most obvious is that you’re selling people’s attention. You want to hold their attention, and it’s not necessarily truth and beauty that holds people’s attention. It’s fake news and extreme views. I think what’s interesting is that all technologically facilitated networks, especially the big online networks, are quite dangerous. The values that are propagated and the ideas that get amplified are not the kind of ideas that John Perry Barlow thought would benefit from the internet back in the 1990s, when he wrote his Declaration of the Independence of Cyberspace.

The novelty of old ideas

Are these networks responsible for the polarisation between, say, the cosmopolitan camp and the nationalist camp that we are seeing today?

The ideas we encounter in the United States or Europe today are not new. It’s almost as if there exists a library of ideas that people choose from based on which seem the most appealing at the time. I don’t think anything original has been said about politics in decades, but because people don’t really study history anymore, they are impressed by the novelty of old things, and very few people can recognise that Trump’s populism is completely derivative of the late 19th century populists. And yet, so many people are running around acting as if something unprecedented is happening. By “unprecedented”, they mean “I never read history”.

What role do social networks play in this repetition of old ideas?

The connection is that the ideas are out there, and the network architecture determines which ones get the most traction. White supremacy never went away as an idea. I remember that as a small boy, the first idea about politics that my parents ever taught me was that apartheid was wrong, indeed, I think it’s the first thing I ever wrote down as a political idea. So there’s nothing new about claiming some pre-eminence for people with light-coloured skin. But why would this dumb idea, which has no basis in science, make a comeback? 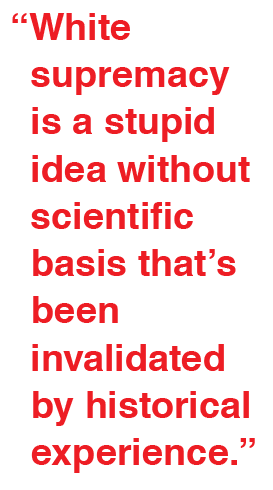 I think the answer is: If you set up social media so that extreme views get more traction than moderate views and outrage is the source of engagement, then anybody who is willing to say outrageous things will get way more views than me, with my boring observation that white supremacy is a stupid idea without scientific basis that’s been invalidated by historical experience. So that’s the problem at the moment. We’ve built these engines of polarisation and confirmation bias. It’s not surprising, therefore, that outrageous ideas make a comeback when the whole machine is set up for that to happen.

What you are arguing is that the networks themselves play a significant role in the ideas that are disseminated. Has that always been the case?

One should never decouple ideas from the network structures that propagate them. Most historians of thought, whether it is political thought or economic thought, tend to talk about ideas as if they float through the air. In reality, ever since there’s been a market for journalism, books and people giving speeches or lectures, a reading public has decided which ideas get traction. We have this kind of cognitive blockage in academic life, which is that there are always academics telling us which books were important in the past. But when you look at the bestseller list for the years in question, there’s a total mismatch. I don’t think those academic judgments are very relevant to a historian.

The metamorphosis of concepts and ideas

What is interesting is which books sell a lot of copies and which ideas are being replicated. Richard Dawkins loves the concept of the meme, which is an idea that self-reproduces over time. This is very helpful here, because back in the late 19th century, ideas about race underwent a metamorphosis. They became more pseudo-scientific; they became biologically infused. People started digging in the United States; they start adding ideas about miscegenation. These ideas, which had a lot of resonance in the 19th-century United States, got exported across the Atlantic. Those ideas didn’t fly over the sea. You have to ask the question, who is translating this stuff? Who is writing about this stuff in German in the late 19th century and giving currency to these new concepts of race – concepts that would subsequently be operationalised by the Third Reich?

I’m fascinated by the fact that there hasn’t been a sustained effort to track and graph the networks that transmit ideas. What I say in The Square and the Tower is that an idea goes viral partly because of its inherent appeal and partly because of its network structure. We can’t write the intellectual history of humanity as if ideas fly around of their own accord.

Is that interplay between appeal and network structure to blame for the dichotomy we are now seeing in the United States, Britain and elsewhere?

We have to be careful of thinking that it’s just a dichotomy. That’s an oversimplification of what’s going on and probably attributes too much importance to the noisiest people. It’s like giving all your attention to the Antifa and to ultra-right, neo-Nazi groups. I recently came across a lovely map of the culture war: On the left, things are quite deliberately fragmented because of intersectionality, while the right is deeply divided between what I’ll call traditional conservatives and the populist right. It’s a multi-front war. Maybe what the social network platforms do is give a false sense of the dualism of our time. The ideas we encounter in the United States or Europe today are not new. It’s almost as if there exists a library of ideas that people choose from based on which seem the most appealing at the time.